Today I wanted to write. It’s the first time since the fire.

For those of you who don’t know me, I’m an author of young adult novels and a college professor. My family and I recently went through a terrible tragedy—a fire took our house and most of our belongings on July 5th. The first place the fire destroyed was my home office where I wrote, read, and recorded my Indie Chicks publishing podcast. Knowing that all my books, my trusty microphone, and writing mementos, including gifts from fans of my books, were gone was deeply upsetting. But that was nothing compared to knowing that my daughters, aged 15 and 11 and my 2yo dog, Zoe, were inside the house when the fire started. My husband and I were not.

My therapist says that writing helps people to cope with difficult feelings. I think it’s time to do that. I want to share it with you because of the incredible support you all have given me and my family through social media, purchasing my books, and the donations to the gofundme.com page that my incredible friend, editor, and podcast co-host, Jeni Chappelle, started. I’m overwhelmed by the support of the writing community, my colleagues, friends, and family.

The fire started around 1pm on Sunday, the day after the Fourth of July. Mark, my husband, and I started our day by hitting some golf balls at a driving range. It’s a hobby that has been fun for us to share. I’m, of course, still learning to make proper contact with the ball. Afterward, we went to our local gym, down the street from our house. Our daughters, Emma and Sarah, like to sleep in, especially on the weekends. They’re night owls to begin with, a trait they share with their dad. So, they were at home, snug in their beds.

I was at the end of my workout, listening to my Spotify playlist for my YA Ashwater series (lots of 80s tunes) while on the rowing machine. I do a lot of plotting for my novels when I’m at the gym. This day was no different than any other. Deep in thought, I glanced up. My husband was running toward me. This was odd because even though we were at the gym at the same time, we don’t work out together. I had my air pods in and couldn’t hear him. He looked stressed and he was saying something to me. I took out one of my air pods, stopping the music. He repeated what he’d been saying, “We have to go. Our house is on fire.”

You know how they say that everything seems to move in slow motion when the unthinkable happens? When tragedy strikes? It’s true. The air left my lungs and every hair on my body stood on end.

Emma, Sarah, and Zoe are in the house and they’re asleep.

I dropped the handle to the rower and it snapped back to its resting place. I fumbled with the straps keeping my feet in place and stood. Or so I thought. I hadn’t quite untangled myself from the machine. With my foot still caught, I fell forward, gashing and bruising my shin. But adrenaline had already kicked in and the pain felt like a scratch. Later, I would see that I’d done quite a bit of damage.

I ran to get my bag and hauled ass outside where Mark was waiting in the car. He floored it as soon as I shut the door. I don’t remember who spoke first but he told me that Emma called him and she, Sarah, and Zoe had gotten out and were at a neighbor’s house. I breathed a small sigh of relief. They were just words. I needed to see and hold my kids to know that they were safe.

On the way, a fire truck passed us and we knew they were headed to our house. My mind was awhirl thinking about all the things that could have started the fire. Did I leave a burner on? Was Emma up using the stove? Did something happen with an electrical outlet? Then we saw the massive gray smoke cloud over our development. My heart jumped into my throat. That enormous dark plume was coming from our house.

We pulled up to the side of the road where at least a dozen bystanders were watching our house burn. It appeared to have started on the roof or chimney. My heart was pounding. Interesting side note that I would think about days later—none of these people called 911 and some had been watching the fire from the beginning, even before my kids and dog emerged from our house. How do I know this? When I got out of our car, one of the bystanders told me they saw our kids get out of the house. Later, I would learn that our neighbor, whose house was also affected was the first to call 911, and she saw the bystanders when she did so. If you don’t know about the bystander effect or the concept of groupthink, this may provide an example. For the most part, these people likely assumed that someone else had already called 911 or, sadly, they didn’t want to get involved.

I ran as fast as my legs would carry me to our neighbor’s house. Our neighbors are a kind, elderly couple that our daughters and Zoe are very fond of. Once inside, I hugged my girls tightly. Emma, my older daughter was clearly shaken and Sarah was hiding under a blanket on the sofa. The blinds were closed. Mark hugged the girls, patted Zoe, and headed outside to assess the damage. I stayed, wanting only to be with my kids. Truth be told, I didn’t want to watch our house burn. I didn’t want to think about my wedding rings on the mantle of the fireplace that I left in the ceramic dish that Emma made for me in elementary school. I didn’t want to think about my desk, which was just on the other side of the chimney that was burning. Or the chance that my laptop, that I had taken to the living room that morning, might survive. All I wanted to do was be with my kids and dog, thankful they were okay.

As some time passed, Emma wanted to talk about what happened. She’s so brave. I’m amazed at how wonderful and strong she is. She was awoken by the smoke alarm, which didn’t go off until the fire hit my bedroom/home office. Her first thought was—mom’s cooking again. Okay, I must eye-roll here. I’m actually a decent cook. When she came out of her room she looked across the hall and saw flames in our bedroom. She immediately got her sister, whose room was next to hers, and headed downstairs. She grabbed Zoe, who was patiently waiting for them at the door and got out. At this point, people were already watching the fire from outside because it started outside. There was also a hero, that we still haven’t identified, using our hose to spray the flames on our chimney.

I’m so proud of Emma. She did everything right. She didn’t panic. She took charge and got her sister and dog out. Later, she asked Sarah for a high five for saving her life. She’s a chip off the old block, that one. After a few hours, that seemed like days, I sat on the stoop of our neighbor’s house and stared up at our charred home. Maybe some things would be okay… 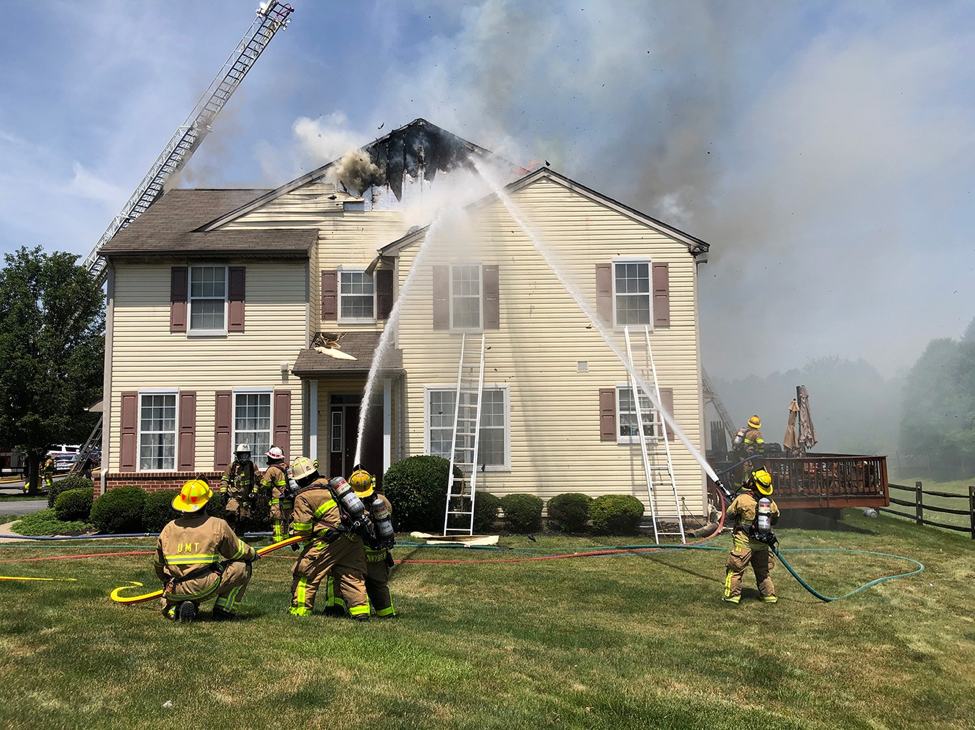 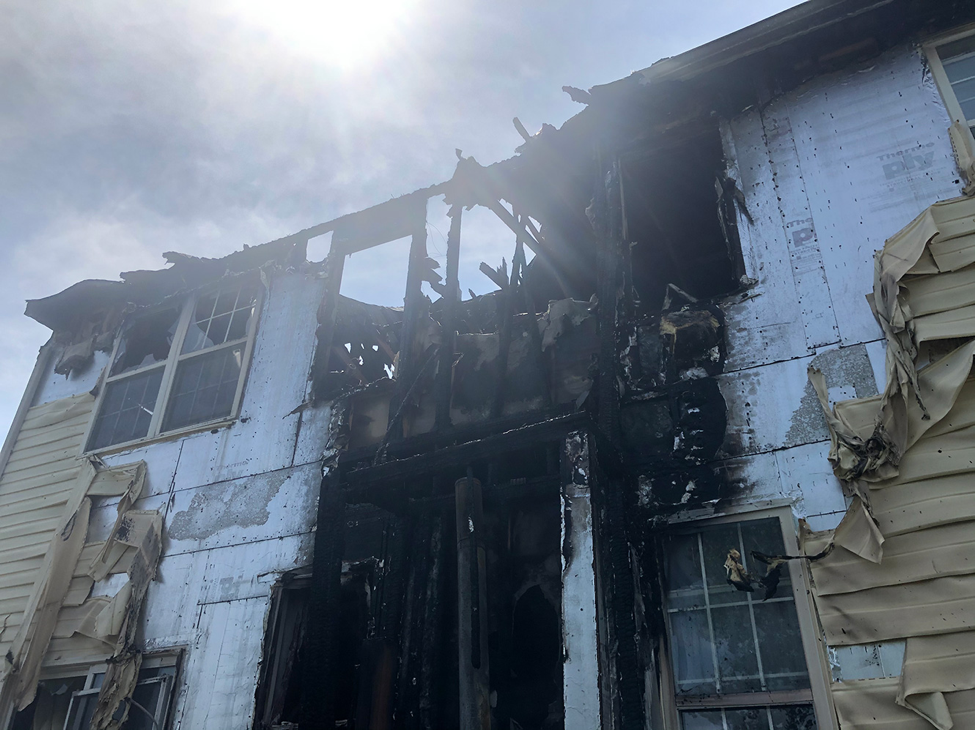 But I didn’t realize how devastating the fire really was. Once we were allowed inside, we were limited to go to certain areas that were deemed safe. Upstairs was off-limits. Everything smelled like smoke. I crept over to the living room but wasn’t allowed in. To my shock, I saw Emma’s ceramic dish on the still-standing mantle and the firemen had thrown a tarp over where I kept my laptop. I asked the fire marshal to retrieve both for me. I wouldn’t know until a few days later that my laptop had survived. But my wedding rings went back on my finger that day, and I haven’t taken them off since. They can be bothersome when I work out, but now I don’t mind them at all. We left our house, now being wrapped in yellow tape, with only the sweaty workout clothes on our backs. Fun fact—shopping for clothes during a pandemic in which your county has just moved from yellow to green is awful. The stores looked ransacked and empty. Apparently, clothes shopping was the first thing on people’s minds. I wore pajamas, the only thing I could find at Target in my size, for two days.

In the days that followed, we learned that we were going to be able to salvage our daughters’ desks and their computers that were in a front room, a coffee table, a side table, and holiday decorations that were stored in an unfinished room in our basement. They are hopeful that the girls’ clothes that were in drawers could also be cleaned. The rest was gone. Making matters worse, the house hasn’t been touched since the fire. There is an ongoing investigation about the cause of the fire that is supposed to be concluded on Monday, three weeks after the fire. I’ll keep you posted. They tarped the roof that was exposed to the elements, but there are holes in the tarp and it failed in keeping out the rain that we’ve had. The cleanup can’t begin until the investigation is over. That means that in addition to the fire, the rains have caused our ceilings to collapse and black mold has started growing inside. What wasn’t scorched is now damaged by water. We’re not holding our breaths about the items they thought could be salvaged.

Here is a picture of our bedroom.

Here’s a picture of our bedroom a few days later with the failing tarp. That’s a giant water balloon waiting to pop.

I’ve spent the better part of the last month reflecting on the fire and 2020, in general. I made a joke to Jeni Chappelle about what happened because I make inappropriate jokes to deal with emotional pain. I said, “First, the world is on fire (the pandemic). Then it came into my house.” I’ve been living in a hotel, down the street from my house, since July 5th. I spend my days cataloging everything I own for the insurance adjuster until it gets too depressing. It’s the worst vacation I’ve ever had. Fortunately, we are scheduled to move into temporary housing on the 29th.

What I’ve learned through all of this is that I’m a fighter and so is my family. My daughters are amazing and resilient. I feel closer to my husband and thankful I have him in my life. When you lose all your belongings and your home, it simplifies your view of life. It makes you remember what’s important. Things can be replaced, people can’t. A nurse said to me recently, “Your health is your wealth.” She’s right. Now, the only thing we can do is look forward, rebuild, and stay positive. Thanks to all my colleagues, friends, and family for your support, thoughts, and prayers. Also, the writing community is AMAZING, and I’m so proud to be one of you.

Keeping it Real: A 2020 Candidate for Indie Authors

A Creative Mind in an Orderly World